Read our interview with the IED Madrid Alumnus, graduated in Fashion Design, and discover all about his career, new projects and memories! 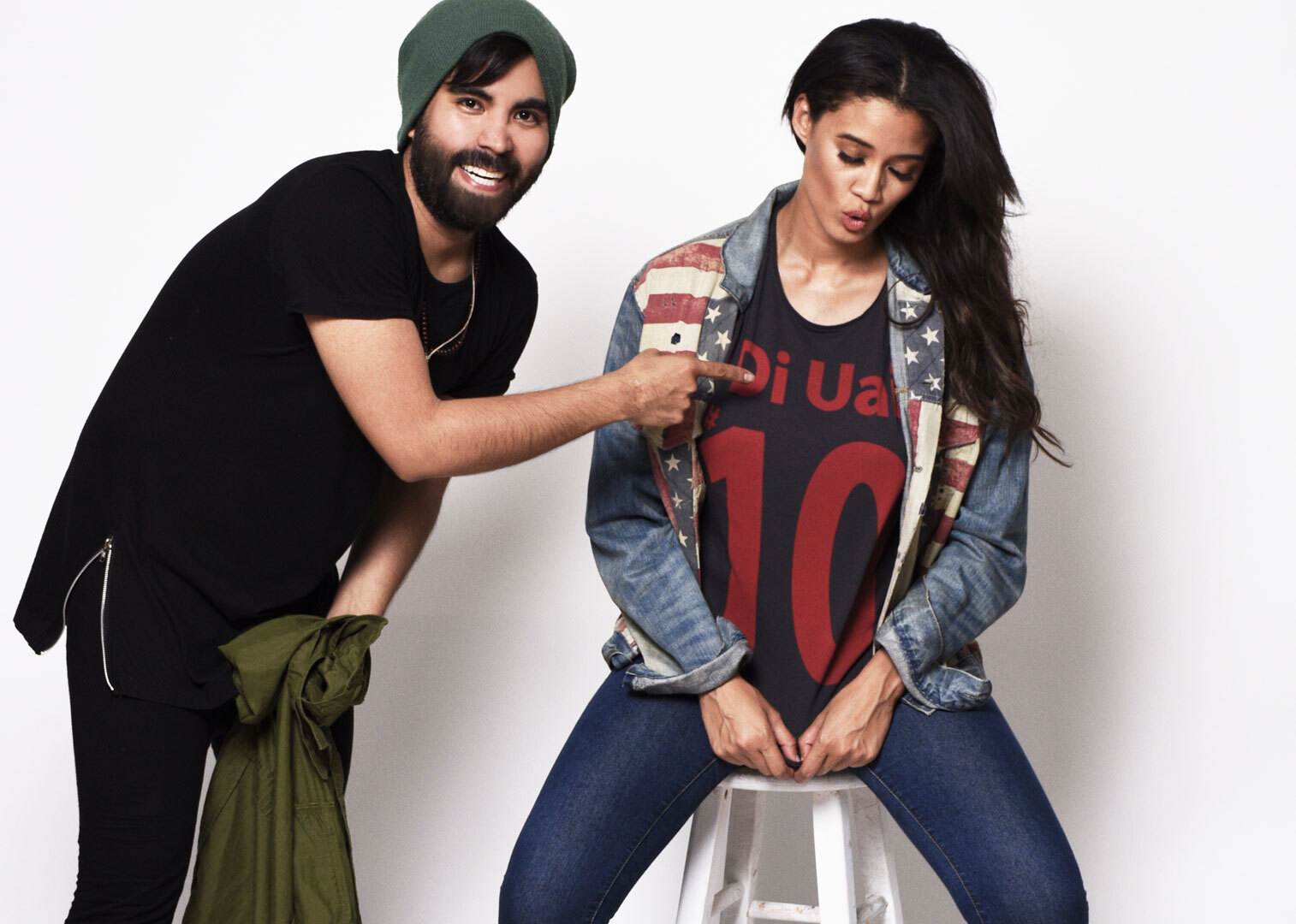 Image of the photoshoot in Los Angeles, United States. The picture shows Diego Yamashiro next to the model.

INTRODUCE YOURSELF: your name, the IED School you attended, the year, and the Course you graduated in.
My name is Diego Yamashiro, better known in the international artistic market as “Di Uai”. Of Peruvian-Japanese origin and I had a scholarship in 2009 at the Madrid campus, through an international scholarship from IED where I had to present a collection inspired on my country of two cultural situations. By doing the photoshoot for the collection of the 4 pieces and sending to the headquarters of IED. Where they gave me as winner for that scholarship so therefore the course, I took was for Fashion design on IED Madrid, Spain. 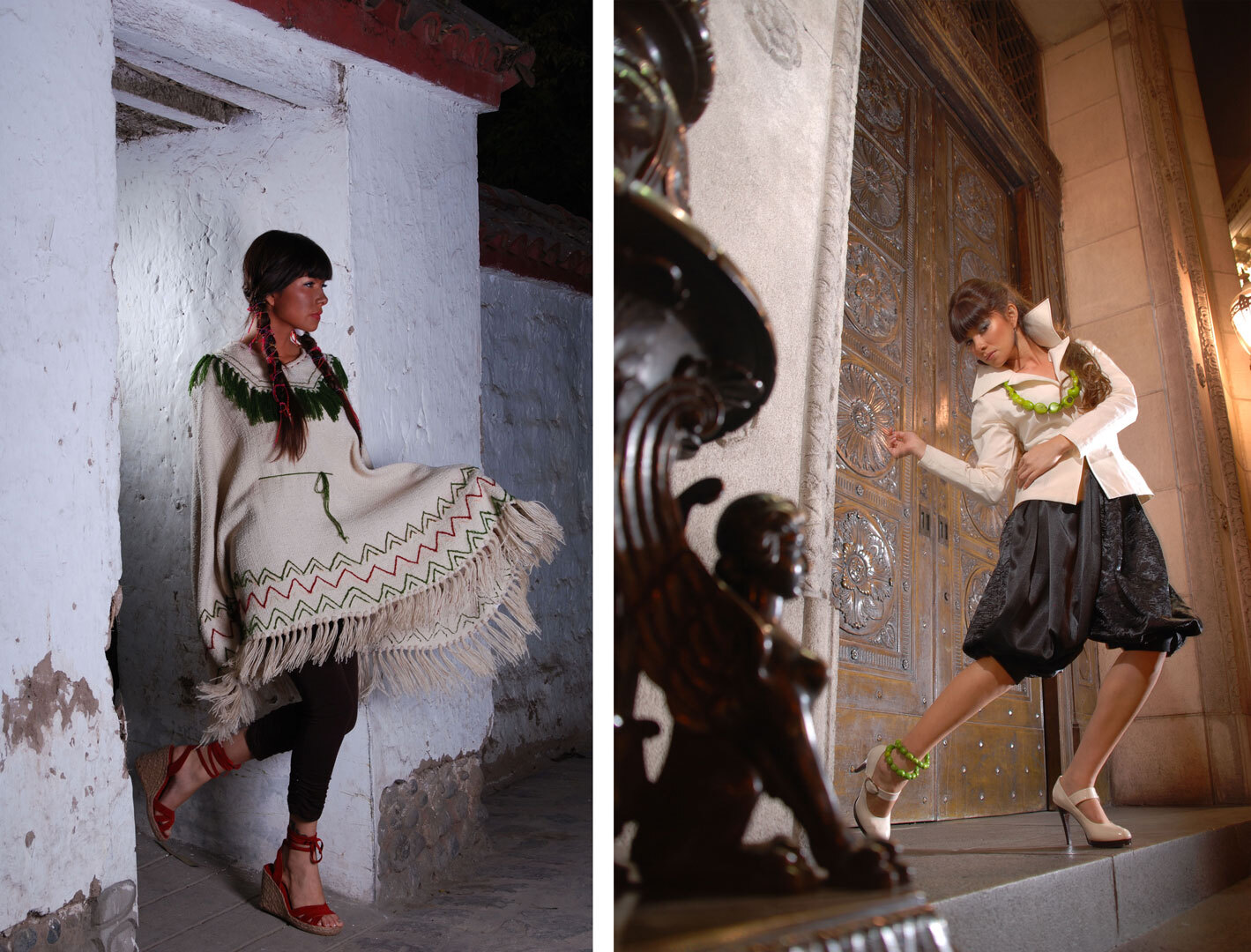 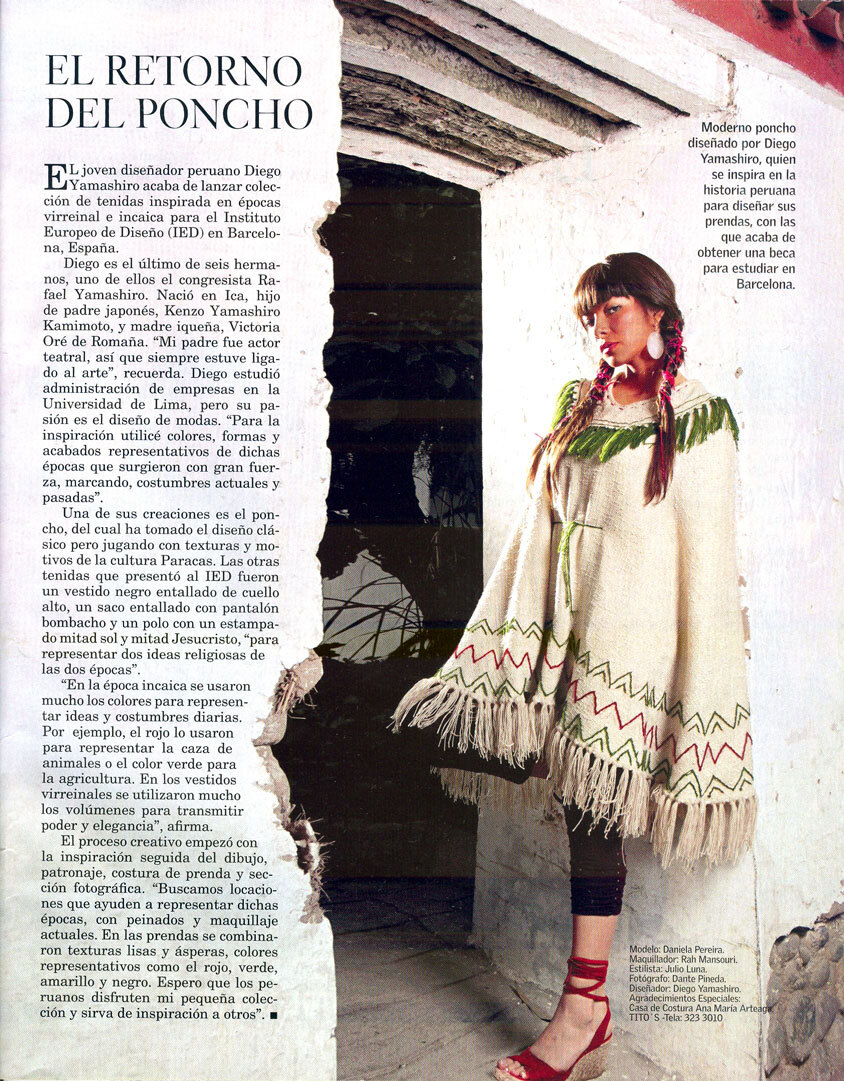 Write-up to Diego Yamashiro, giving information about the IED contest, and giving him as the winner. Caretas Magazine, Lima – Peru.

YOU NOW: your job description and where you work. Can you also tell us about one of your latest projects? What was it about? Did you face any challenge with it?
My role at work goes from textile fashion designer, footwear, accessories, Etc. produce all of them, also as photographer, graphic designer, and international broker. That’s how I carry all this functions in this big chain, From the obtention of the garment, photography, and presenting the advertisement posters. 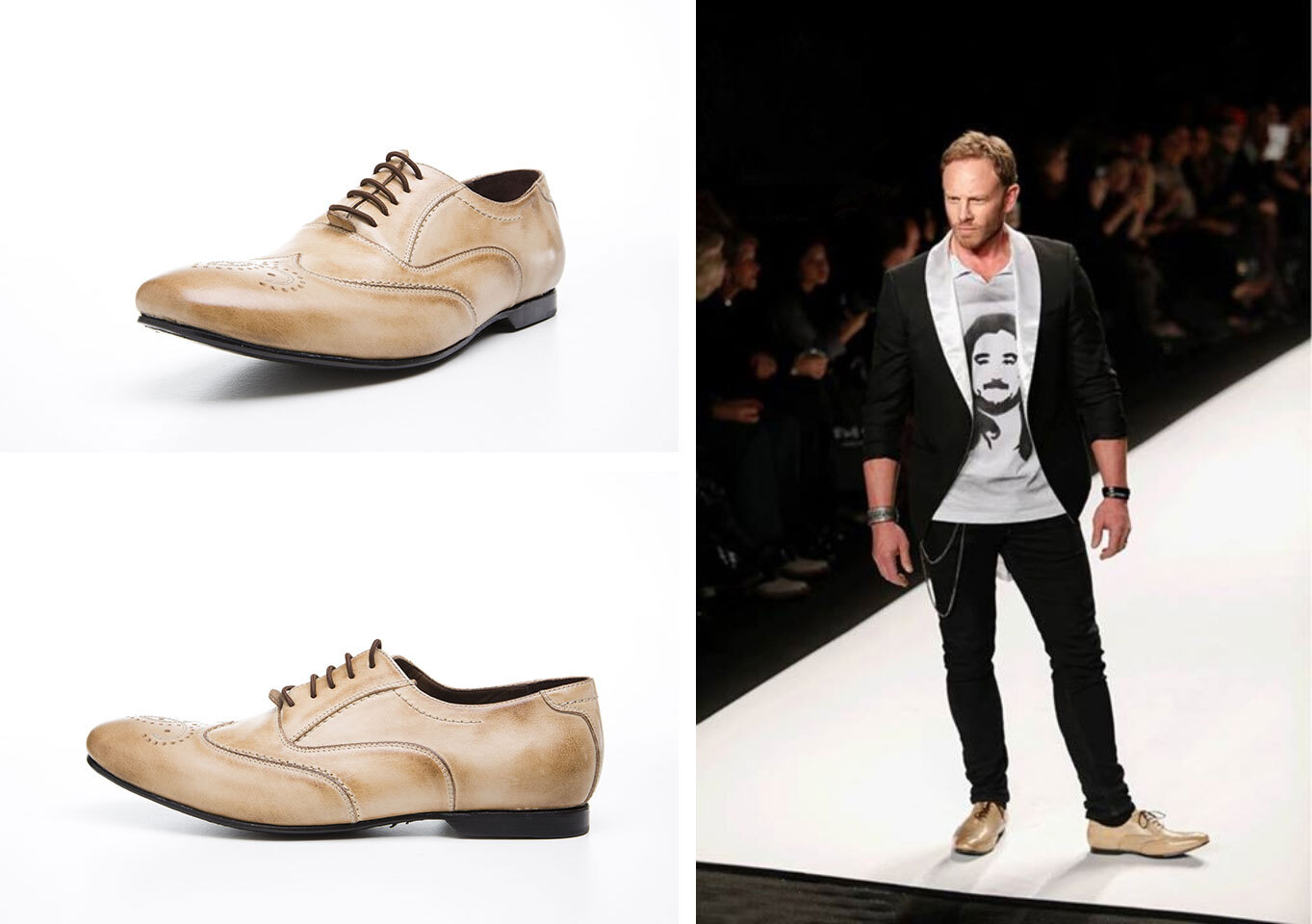 Currently, I work Independently, through my company “Di Uai Holdings Company” which have the registration of the Peruvian government in that country. Therefore, I have an international brands portfolio that require my services, one of them is the Spanish brand in Madrid, Devota y Lomba, the one directed by the famous Modesto Lomba, current president of the chamber of design in Spain. 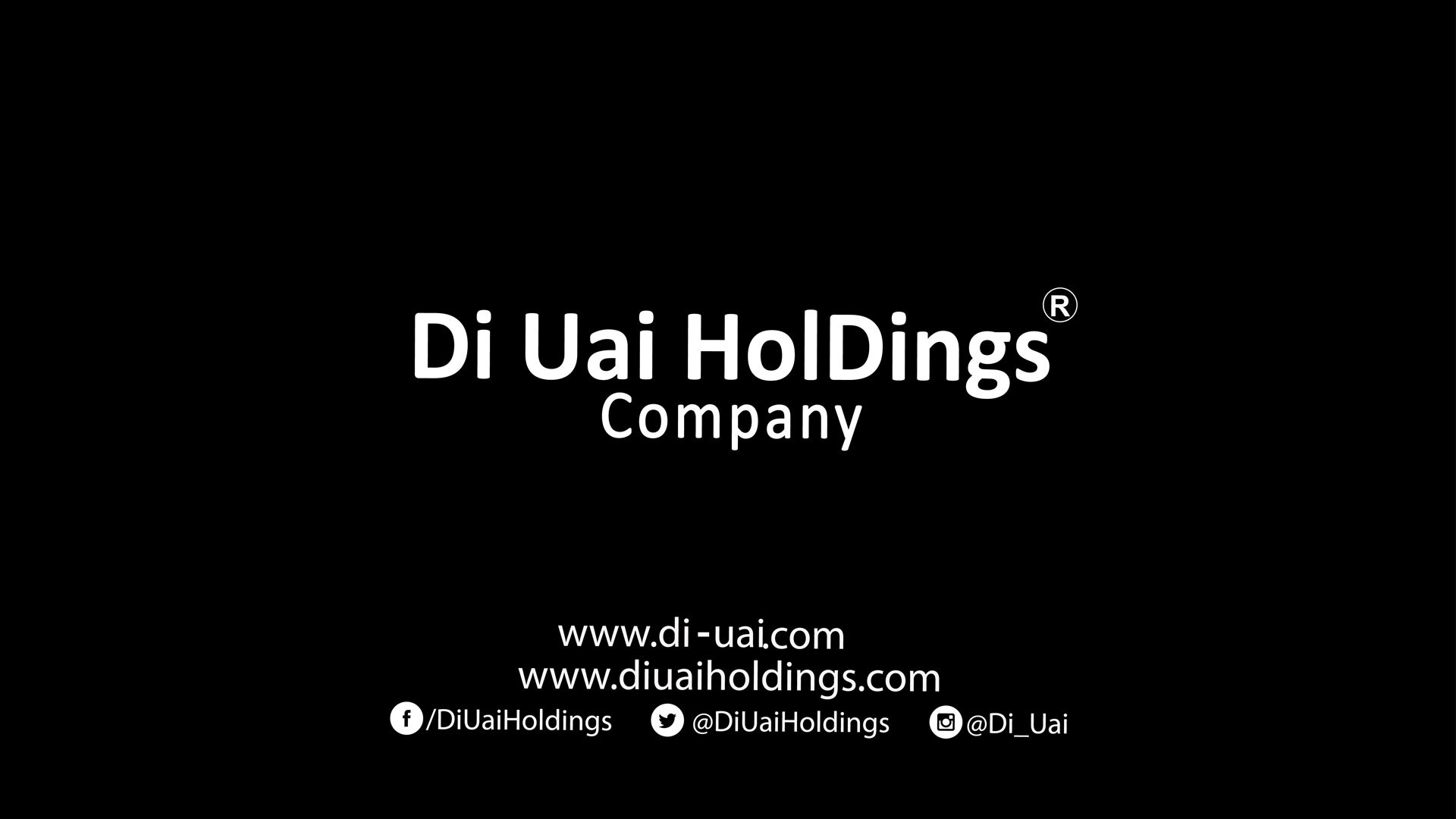 Di Uai Holdings Company logo, this company is used to fulfill the functions that the client wishes in artistic matters. Logo designed and created by Diego Yamashiro, from the name to the color combination.

In my recent international projects, I have exhibited my garments from creating the fabric, designing fashion and photography at a concert at Madison Square Garden in New York City, performed by two famous American singers, Jeff Timmons and Layzie Bone. The main challenge in this event was to obtain that the product designed and developed by me, possesses harmony and A1 quality from the fit and touch, all of this so the images obtained in the written press as well as television, have great enhancement in taste for an event of such quality. 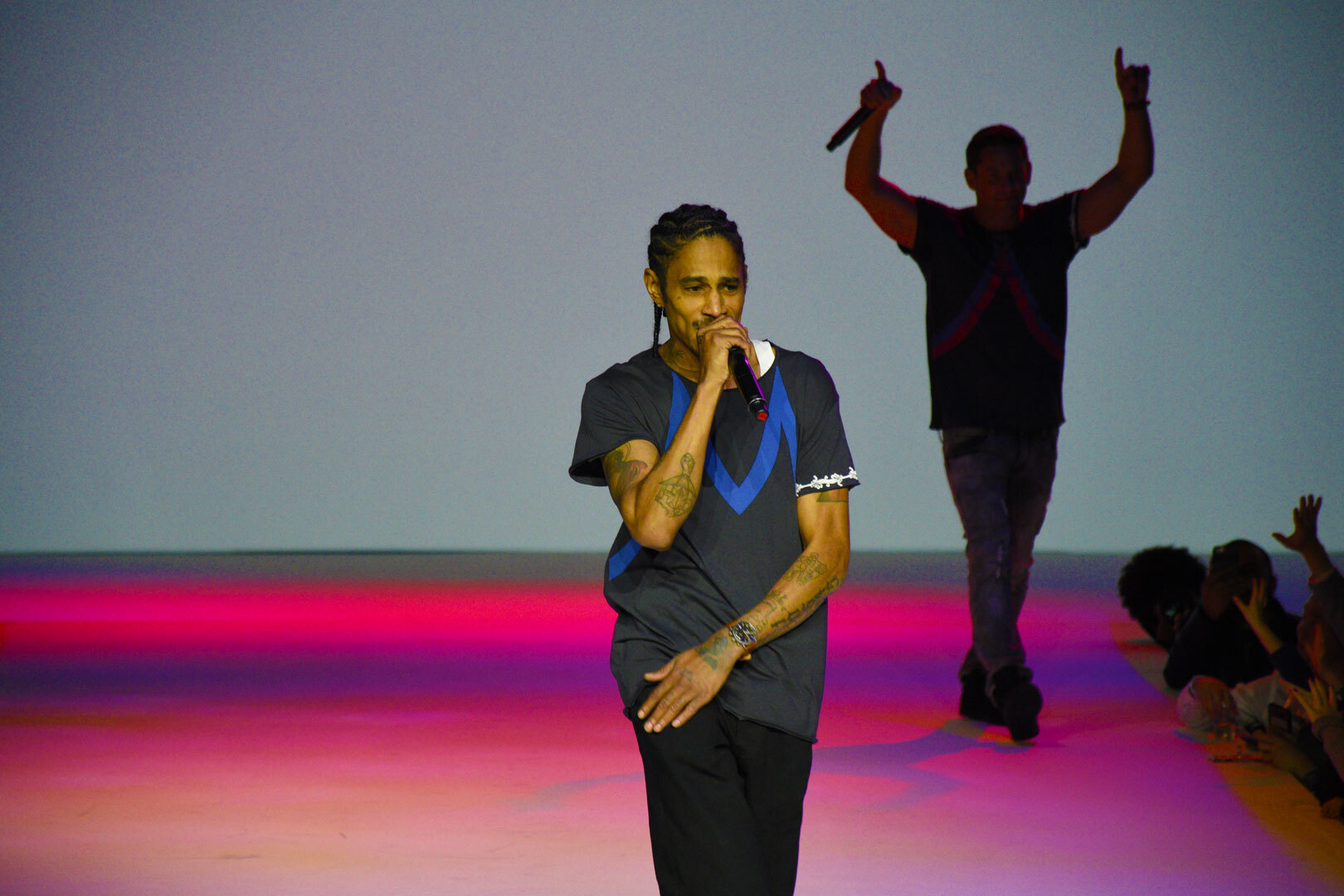 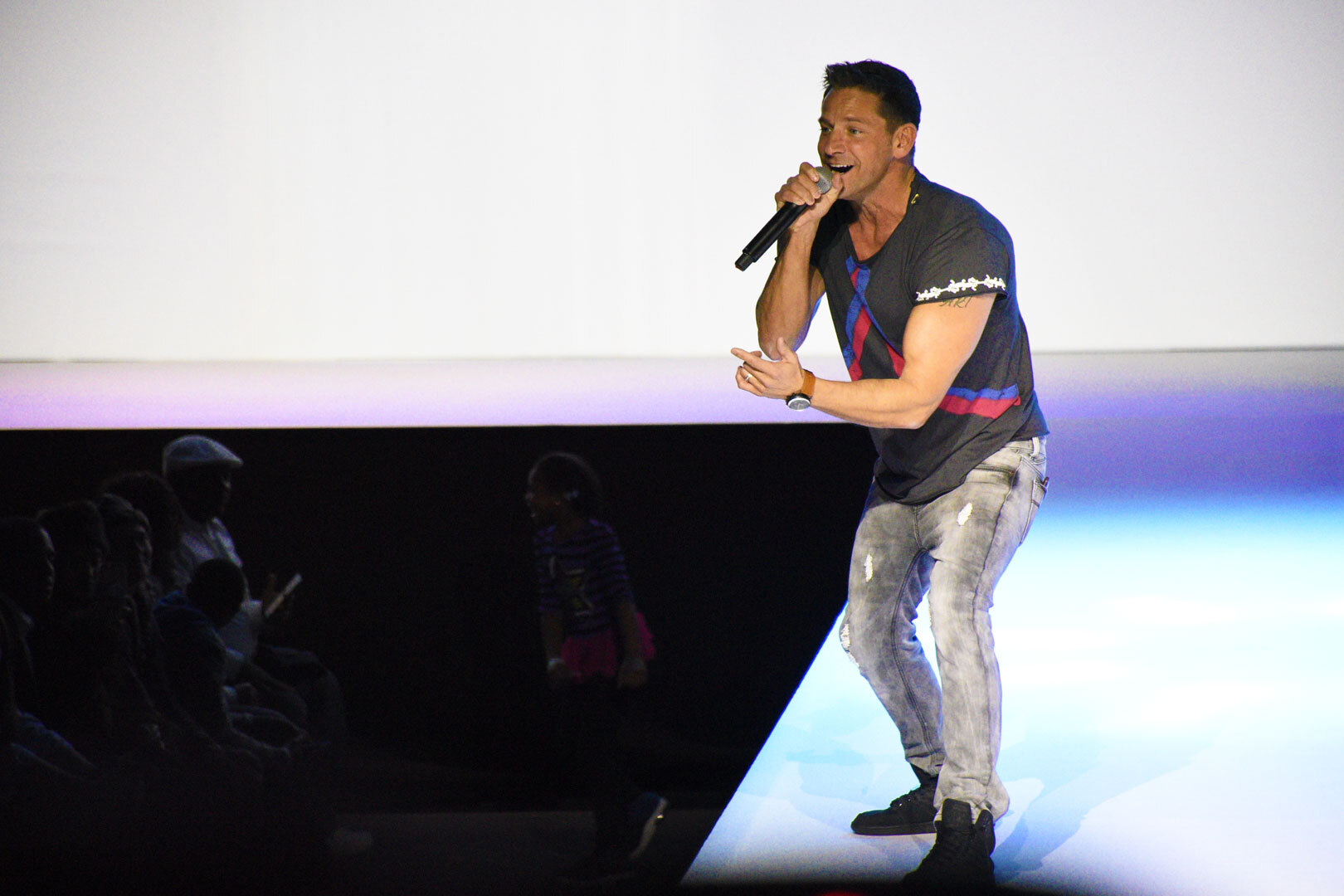 Another interesting last project was in Madrid under the Devota and Lomba brand, where I had the role of image manager of the Summer collection, which was called OASIS, so where I had to obtain an image related to the name of the collection, Therefore, I selected light outfits in motion with the models, and minutes before the show started at Mercedez Benz Fashion Week Madrid, I had to portray the model with the selected outfit, and obtain the image related to the name of the OASIS collection, which I was able to obtain a picture where it was given to show a distortion of the look obtained by the movement of the model, which gave an idea of the sand moving in an oasis. The great challenge for this project was hitting the right combination of camera options and having two minutes per model because our show at Mercedez Benz Fashion Week Madrid was already starting. 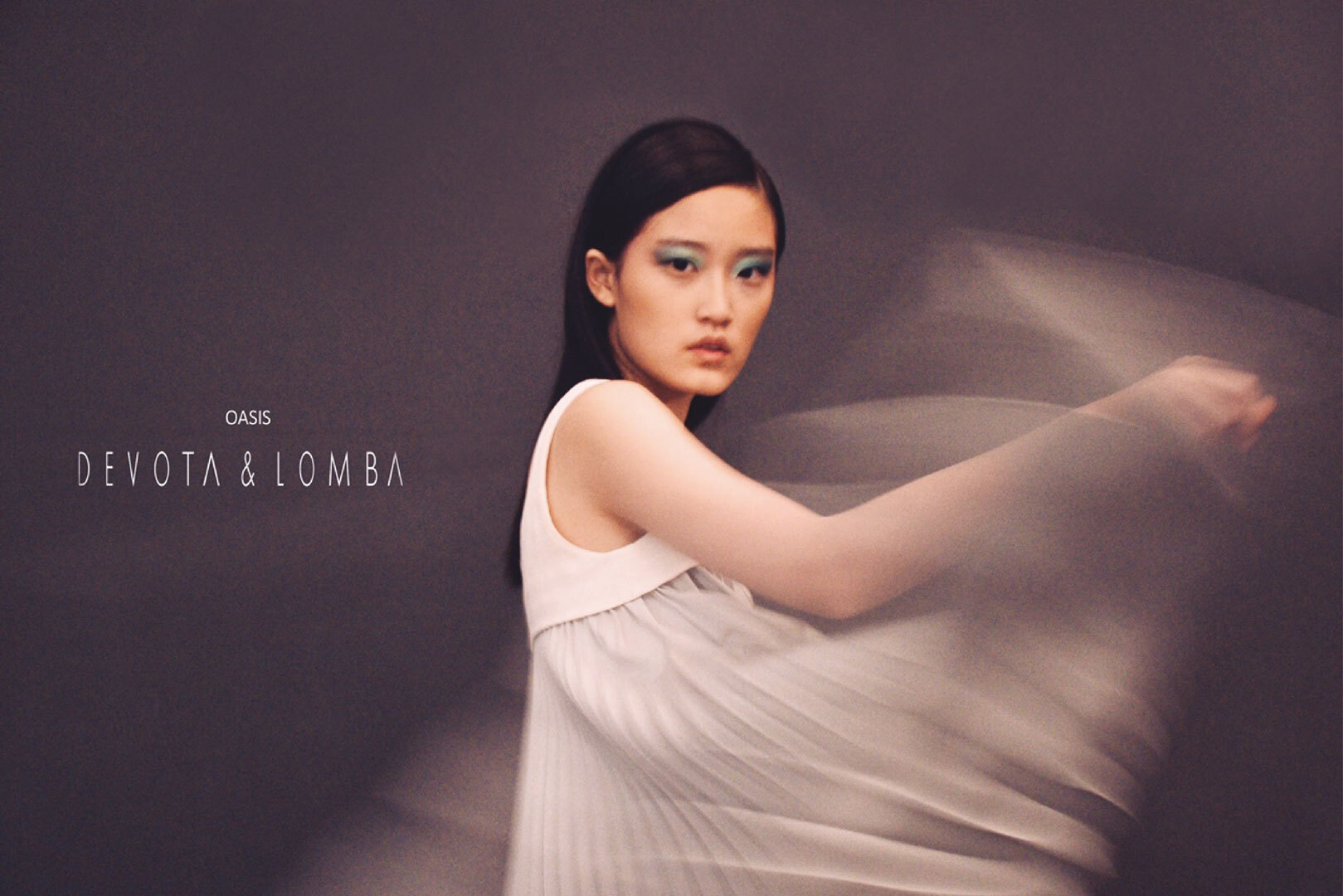 Image photographed by Diego Yamashiro at Mercedez Benz Fashion Week in Madrid; this image can be seen in a movement of the model where it gives the appearance of a whirlpool originated by the air in an oasis setting.

CREATIVITY: IED means creativity, culture, projects and planning. Let us know how both these aspects led you to choose IED and how they helped or influenced your career.
I chose IED, after analyze and compared it internationally with A1 schools throughout the world of design. The concepts were seen throughout its infrastructure and even in the teaching methodology. I arrived at IED thanks to the information provided at the Embassy of Spain in my country, Peru, about scholarship competitions at that time in that country and I arrived at the Embassy of Spain, thanks to a personal recommendation that made me the Spanish singer Miguel Bose, since in an internship during his visit to Peru, the singer was able to meet with my older brother for a matter of associations of cotton producers of the world, since the two were presidents of cotton plants and after those meetings, in his backstage prior to his concert, I was able to ask him for a recommendation of art schools in Spain, and that gave me the beginning of my artistic history, the recommendation was to look at the Embassy of Spain that they always keep informed of international cultural competitions. So I was able to meet the IED, find out about the school, apply and win the scholarship. Creativity, culture, project, and study have helped in my career since every initiative of a new project leads to unite these concepts and to be able to obtain something really relevant if we respect each concept in its entirety. 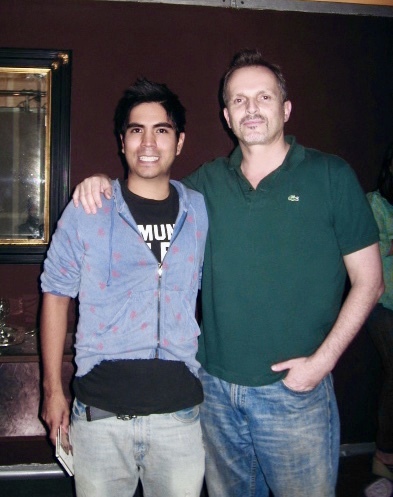 IED LOCATIONS: all our schools are found in some of the most creative and vibrant cities around the globe. Let us know why you choose the city you went to and what role it played in your student and future life.
I chose Madrid, since I already knew it, and since I saw it I felt in love with the streets with each architecture of pure culture, its endless nights of pure sensory energy, I fell in love with Madrid, therefore I chose it. Madrid has given me a lot, since IED school when I was a student and an artistic dreamer, and even my first internships with the design team of the famous designer Modesto Lomba. The Madrid spaces also gave me photographs of nature and architecture, which in 2011 in Lima-Peru I was able to carry out a photographic exhibition called "Eyes by Diego Yamashiro" where I showed the inspirational part of a fashion designer through photography, these pictures showed me a combination of colors, shapes or textures, which were reflected in garment design. In my future life, Madrid continued to give me many results of recognition work, where I continued to work under the design team led by the established designer Modesto Lomba on his Devota and Lomba brand. 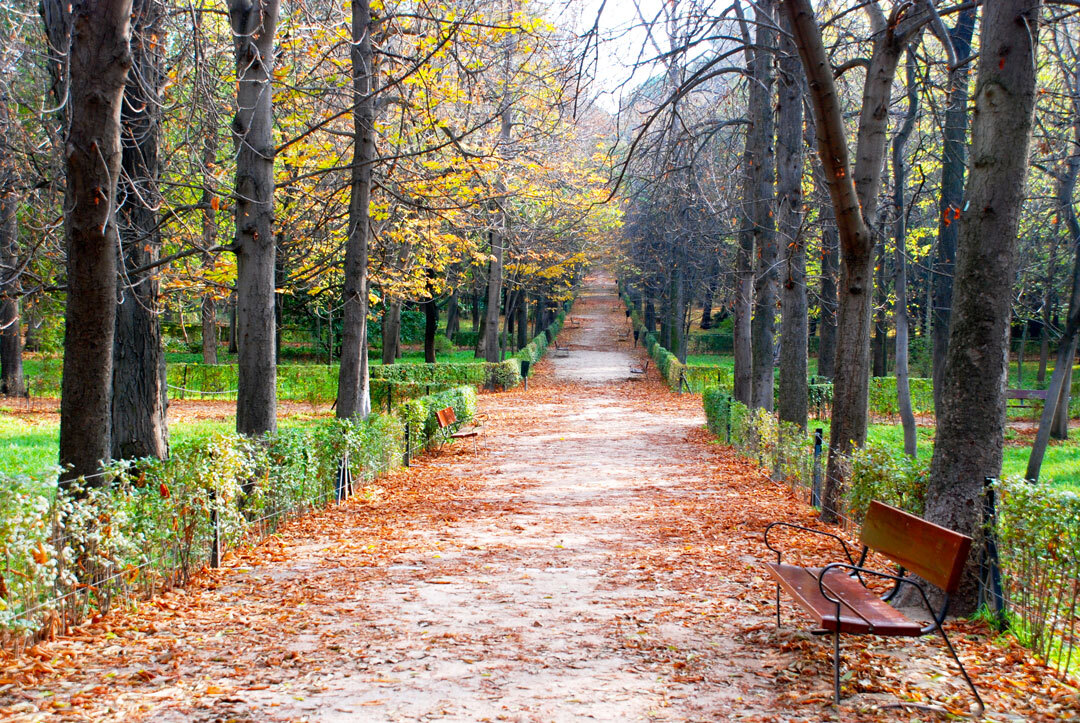 Image of Diego Yamashiro, from the Retiro Park in the middle of Madrid's Autumn. 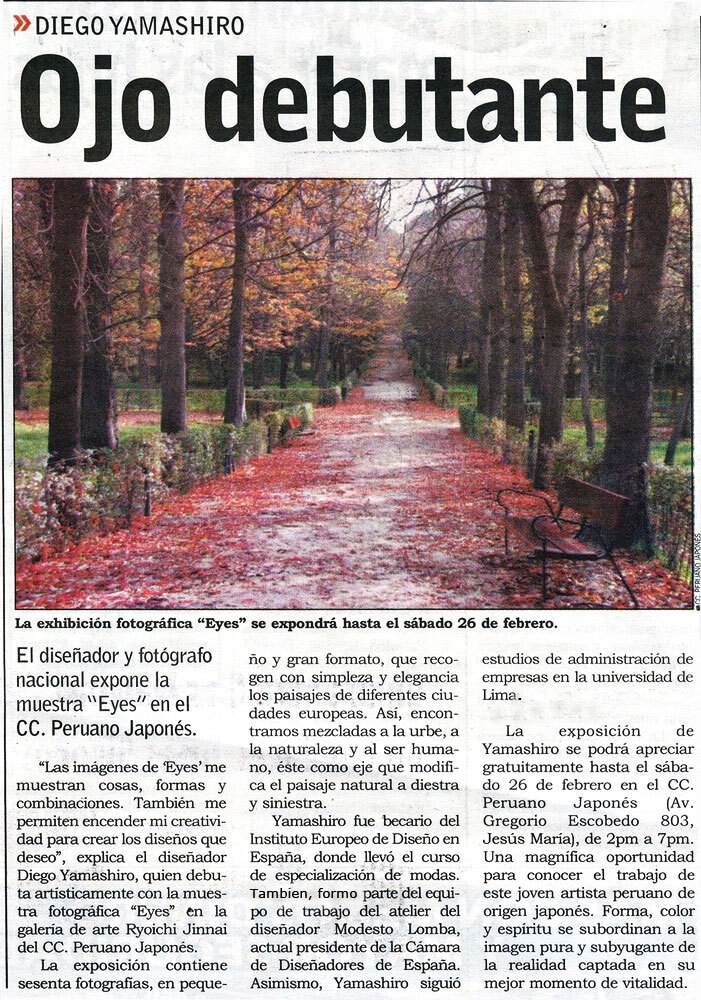 Write-up to Diego Yamashiro, where this photographic exhibition was explained and there is already talk of my international artistic career. Peruvian government newspaper, called “El Peruano. 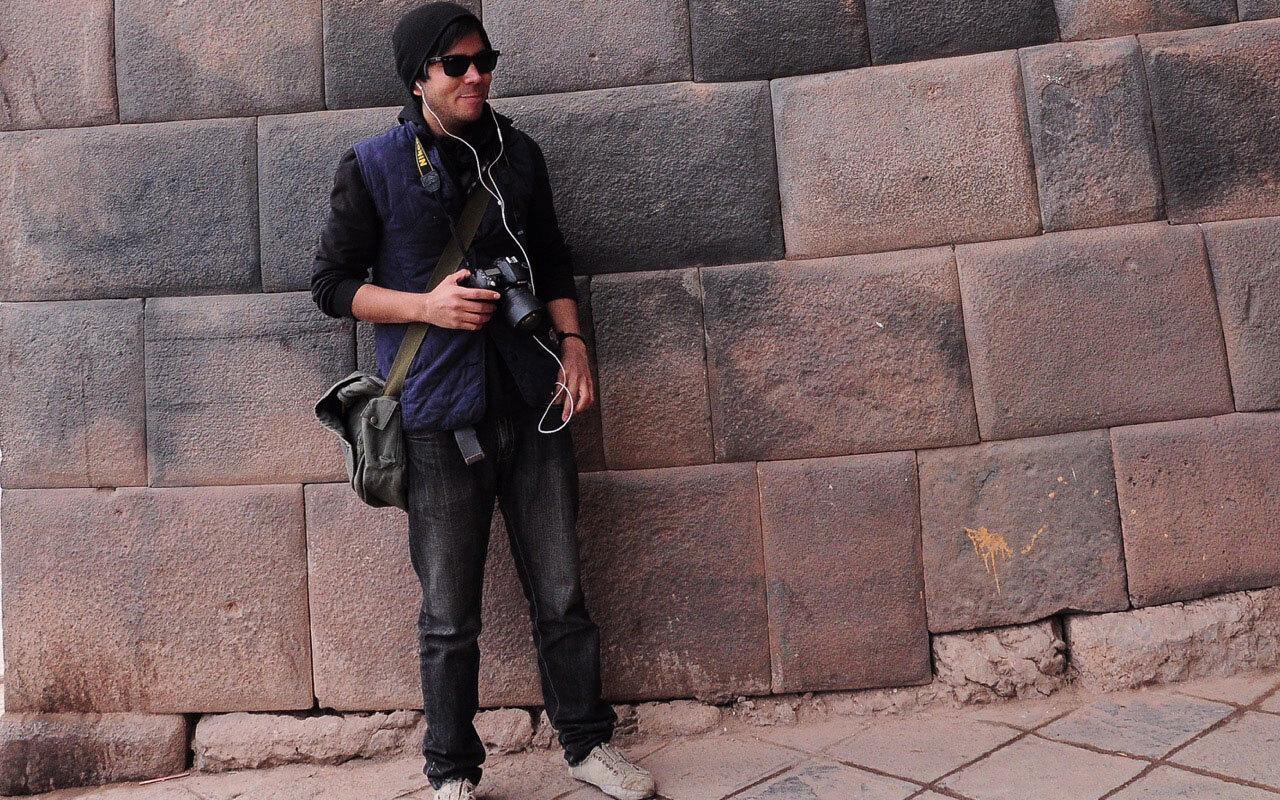 Diego Yamashiro portrayed in the imperial city of Cusco, where he was already showing his work as an urban photographer.

MEMORIES: let us know of a particular episode during your studies in IED, that you remember fondly and is a moving or funny experience.
I remember a lot the excursions to carry out a project for the school, and these excursions were carried out in places outside the city or neighboring towns. In these trips we socialized a lot among with my companions, who always showed their kindness of new friendship. I also remember teamworks where you had to interact with talented students from different areas and too the quality of the teachers very much, and there was a special teacher who was very detailed and visionary, Isabel Sanchez, who recognized the talent from the beginning, was like a special tutor for me, keeping me attentive to her classes 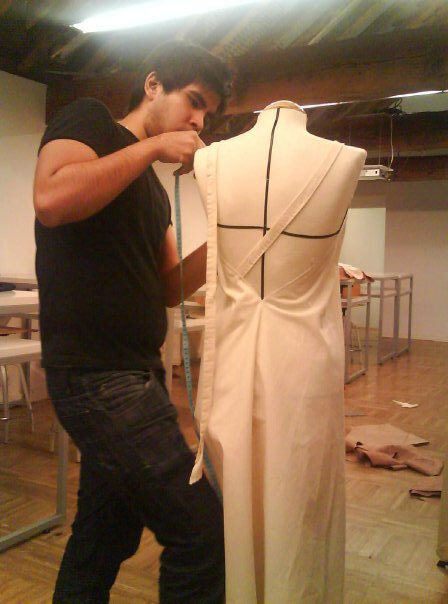 Picture of Diego Yamashiro, in full pattern work at the IED headquarters in Madrid

CHALLENGES OF OUR TIMES: how have the challenging times we're living affected your professional life?
The challenging time of the COVID at the beginning affected by trying to find a new work system before I worked from home or elsewhere, but which was strengthened in the face of my clients who were in other countries, therefore, in the face of this adversity, I turned it into a strength towards my duties to fulfill. Faced with new scenarios that we find on the way, we must find a way that the new scenario is favorable for us artists. Let me tell an episode of work in pandemic time. I had to design and produce a jacket from my country Peru for a very famous candidate for the presidency of Peru, Keiko Fujimori, which I did living from Miami, United States. For which I had to do a remote management job with my producers in Lima-Peru and it was possible to create and produce said garment. The jacket was also worn by a famous Peruvian host of a national TV program, Andres Hurtado, in his last program dedicated to the Country of Peru. 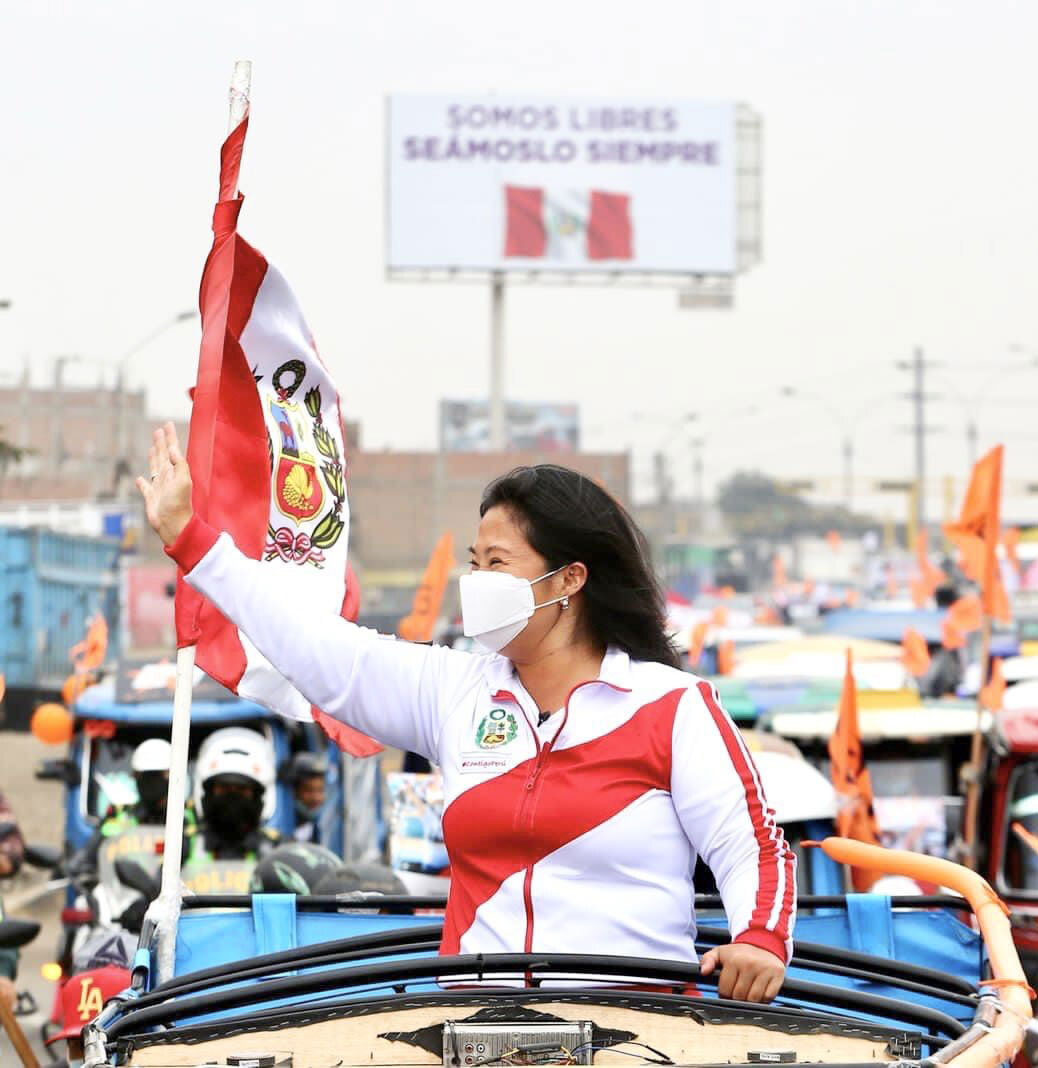 Candidate for the Presidency of Peru, Keiko Fujimori, in full political campaign touring all of Peru and wearing the Peruvian garment designed and manufactured by Diego Yamashiro. 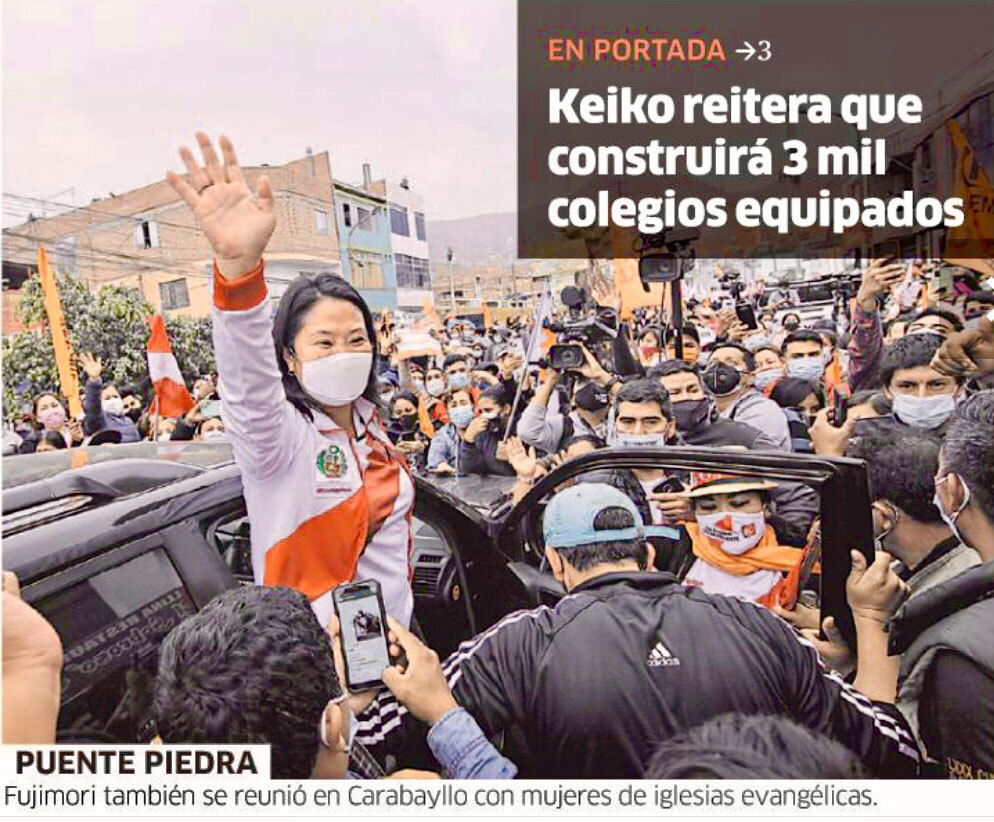 Candidate for the Presidency of Peru, Keiko Fujimori, in a Peruvian newspaper, where she is seen wearing the garment designed and manufactured by Diego Yamashiro. 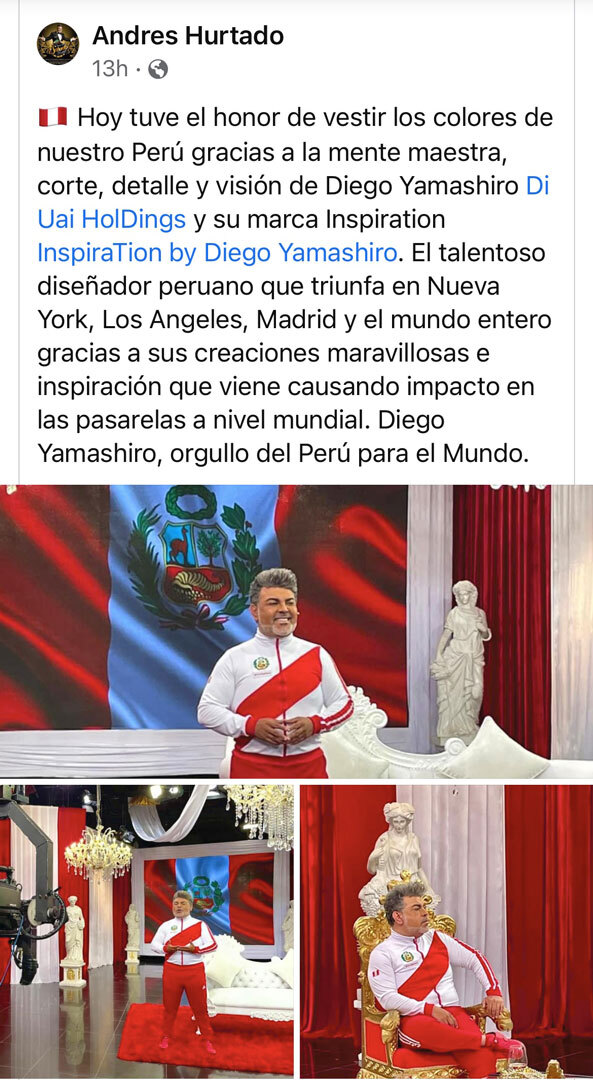 Picture of Words dedicated to Diego Yamashiro in his social networks of the famous Peruvian driver, Andres Hurtado, where he is seen wearing the jacket of Peru, designed and manufactured by Diego Yamashiro

ADVICE: your recommendations to future graduates for a bright and creative future in your field.
Never lose the strength for which we chose our artistic career, strength and perseverance always leads to training in some subject in art and therefore to be able to develop and be recognized. The recognition will come after having worked, I work with perseverance and perseverance, and remember that not every day is colored, since our story is called Life, life of minutes, hours and days. I wish you the best omen, and I let you know that from the episodes that have occurred, the consequences come and which could bring recognition. Forces in everything, and always envisioning the next step based on your previous steps well taken 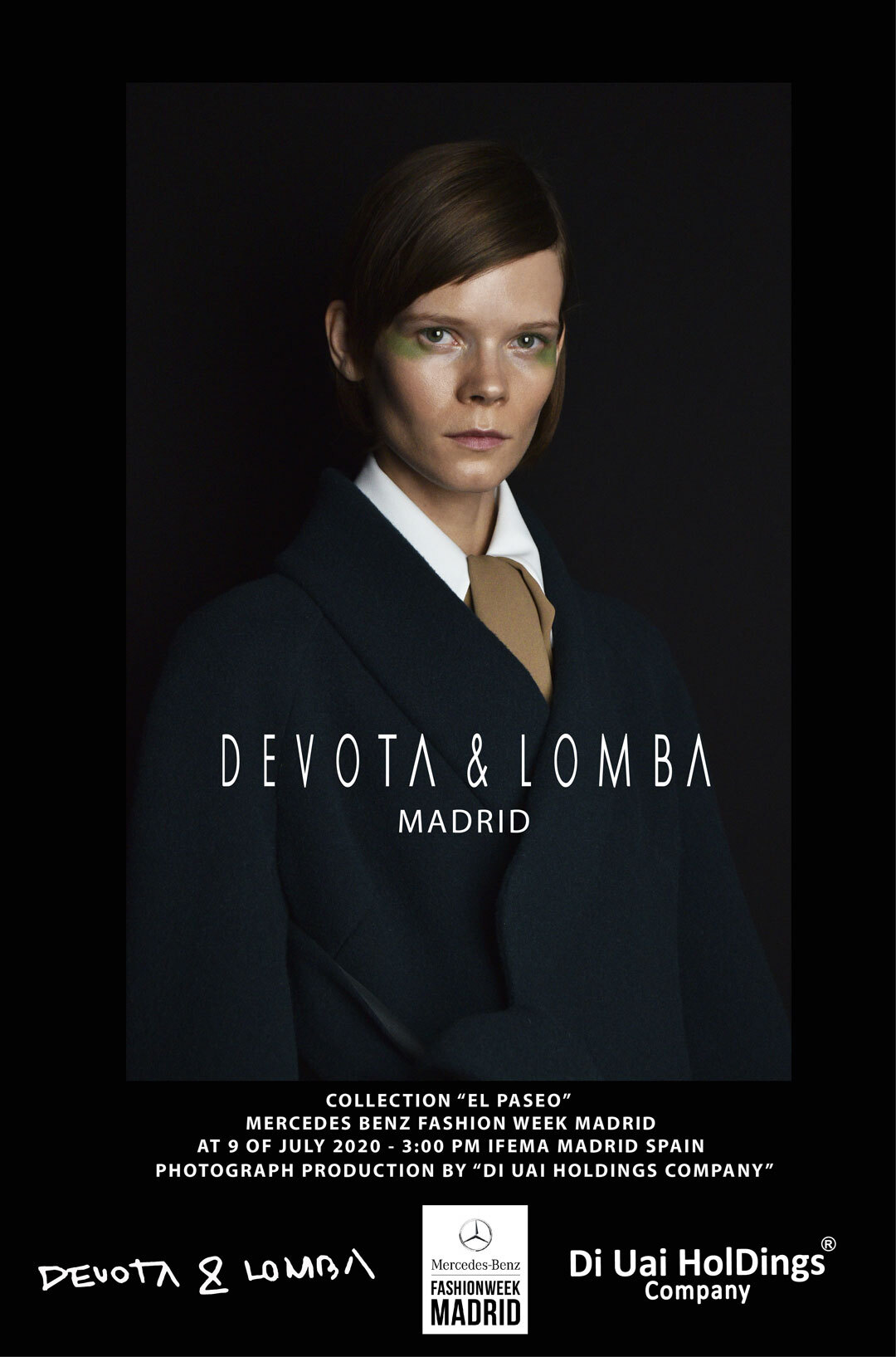 Advertising panel with the Top European Model Irina Kravchenko created by Diego Yamashiro from the taking of photography, graphic design and textile design, for the Devota and Lomba brand in Madrid-Spain, directed by the prestigious fashion designer, Modesto Lomba.

MORE ABOUT YOU: let us have links to web pages where students can discover more about you and your work.
My website: www.Di-Uai.com
Instagram: @di_uai
Facebook: @DiUaiHoldings 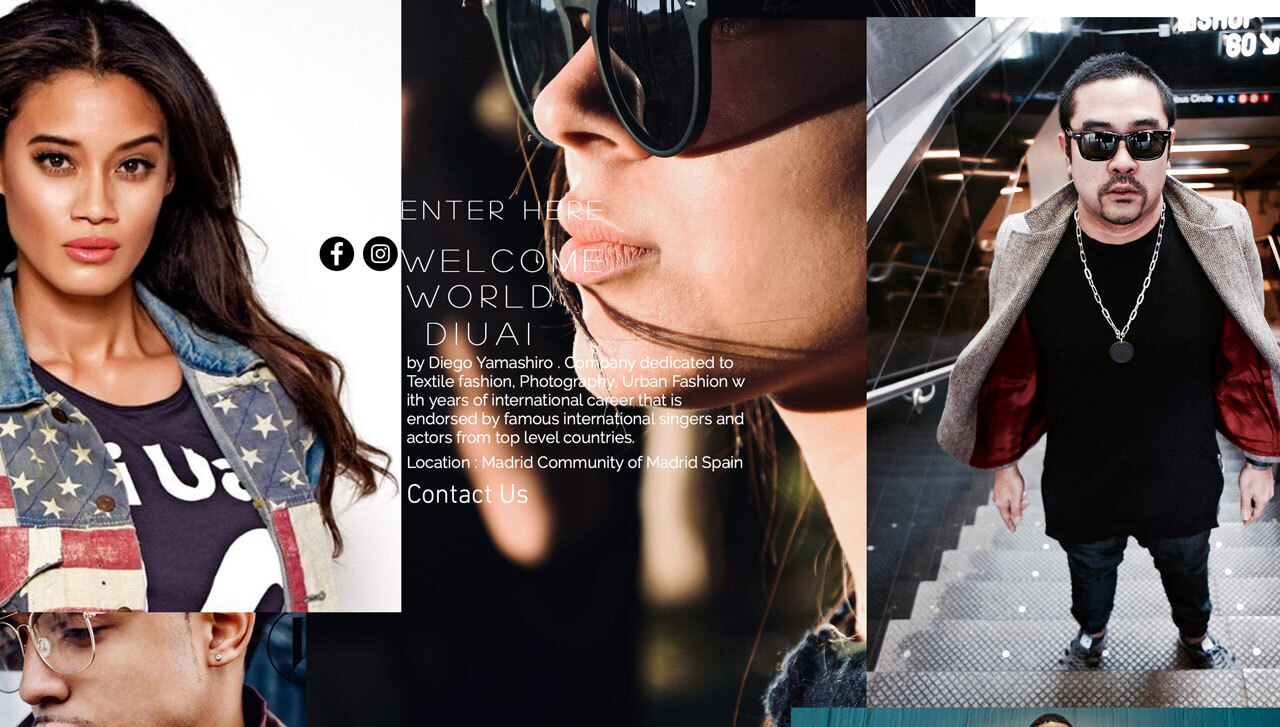 Screenshot of the website, created and designed by Diego Yamashiro. 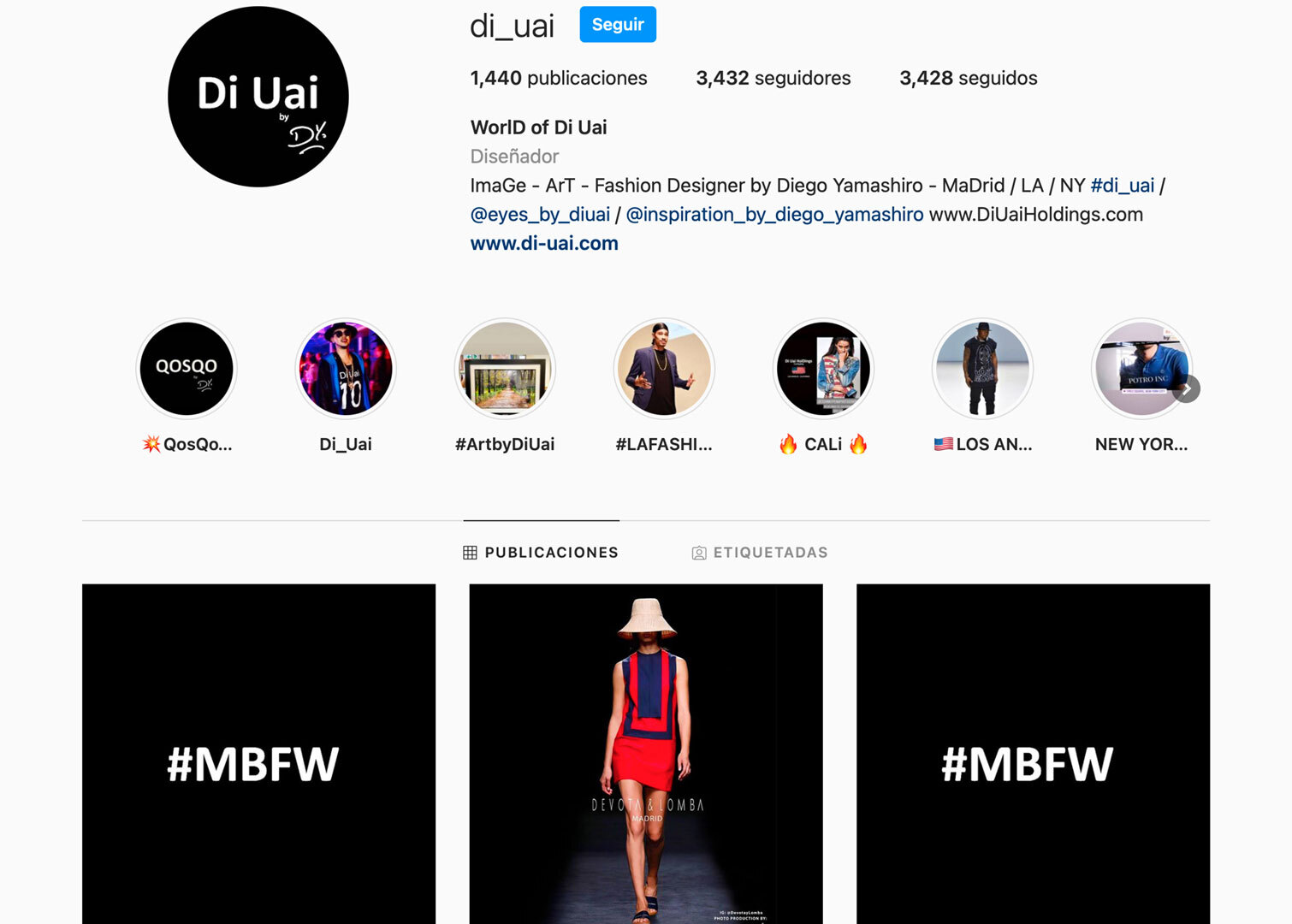 Screenshot of Instagram, designed and directed by Diego Yamashiro.

LAST BUT NOT LEAST: what was the activity that you found most valuable to your personal growth? Also, can you tell us about your thesis project?
The most valuable activity that helped me in my personal growth has been the interaction with people of different teams or fashion sectors or recognized artists, with which I could learn from them and be able to polish the talent that we all wear as an artist. This interaction with famous artists around the world could give me a vision of how they work and that I could get my style of work, style with which I always tried to put my touch of harmony, which has never failed me. About my thesis project I focused on analyzing the morphology of the forms that could be carried out with textures, as well as seeing how the harmony not only had to have volume, but an exact combination of shape for the eyes 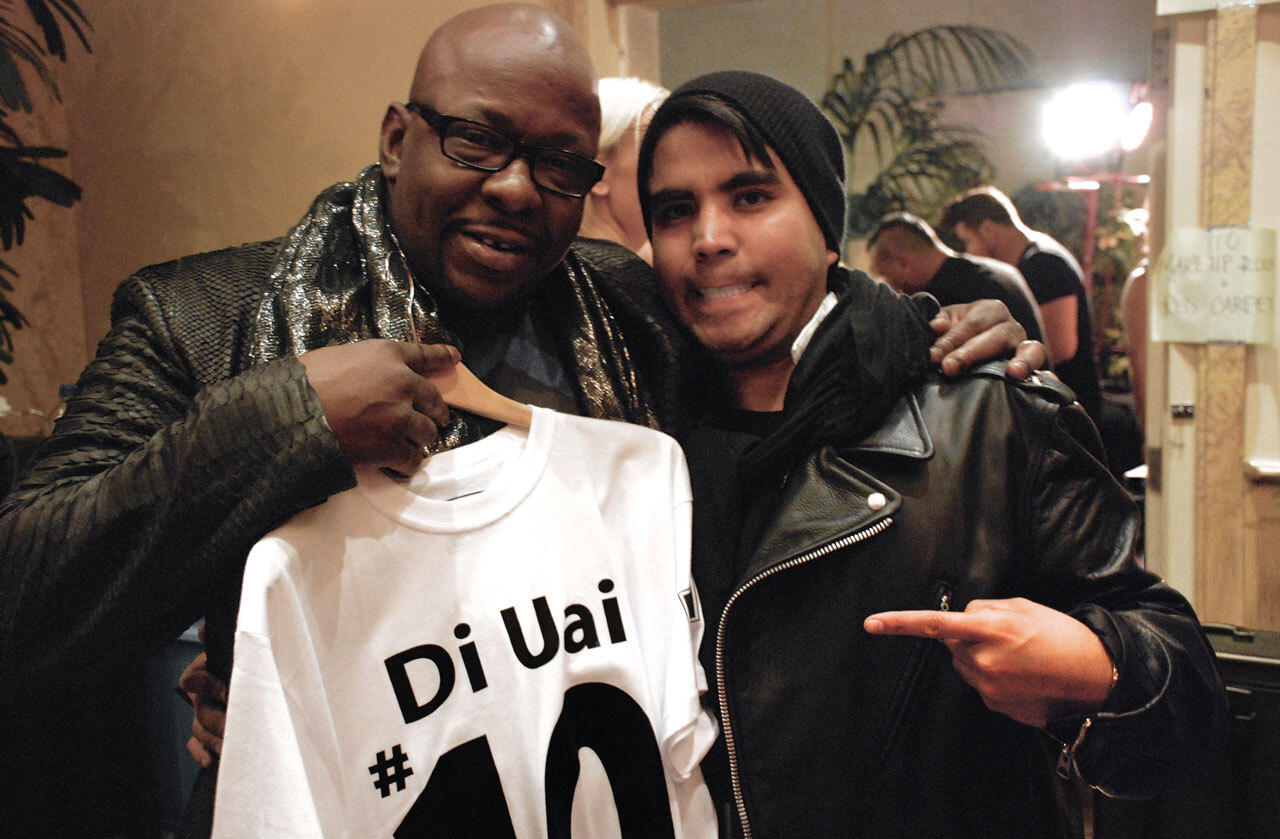 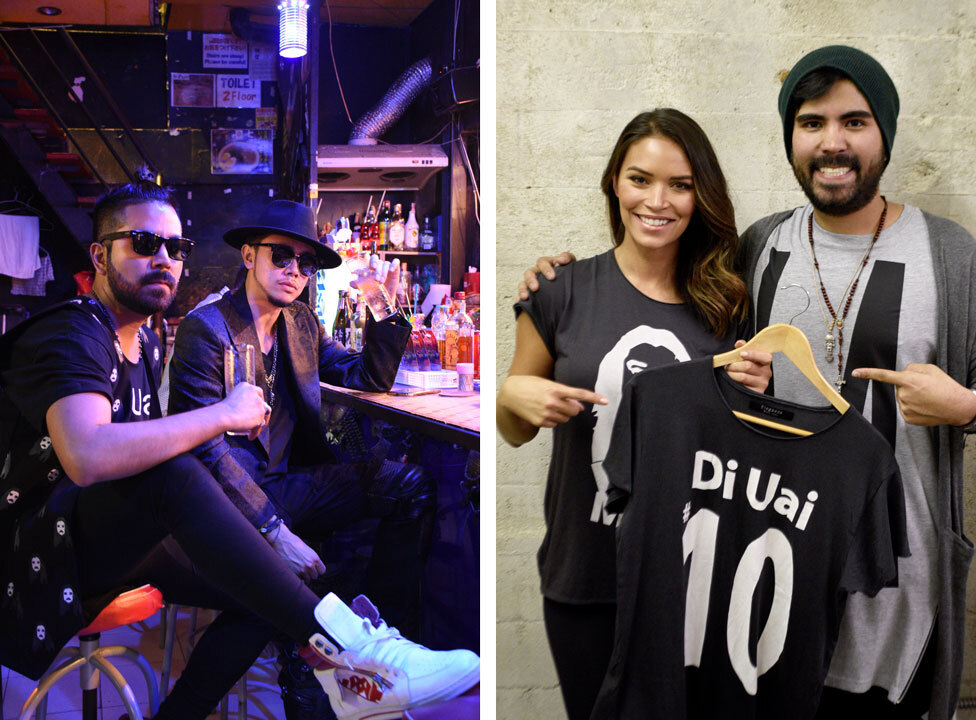 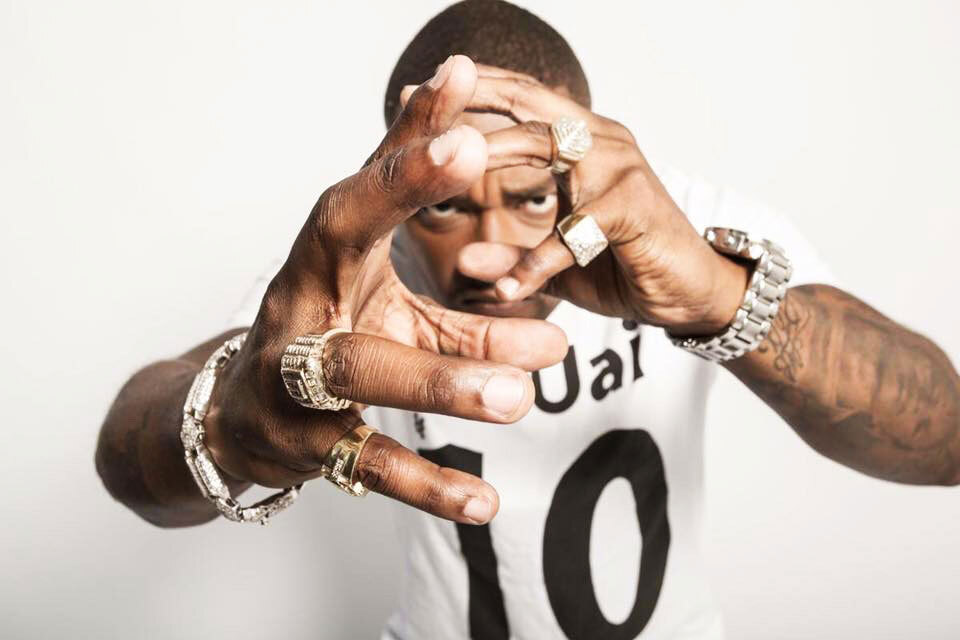 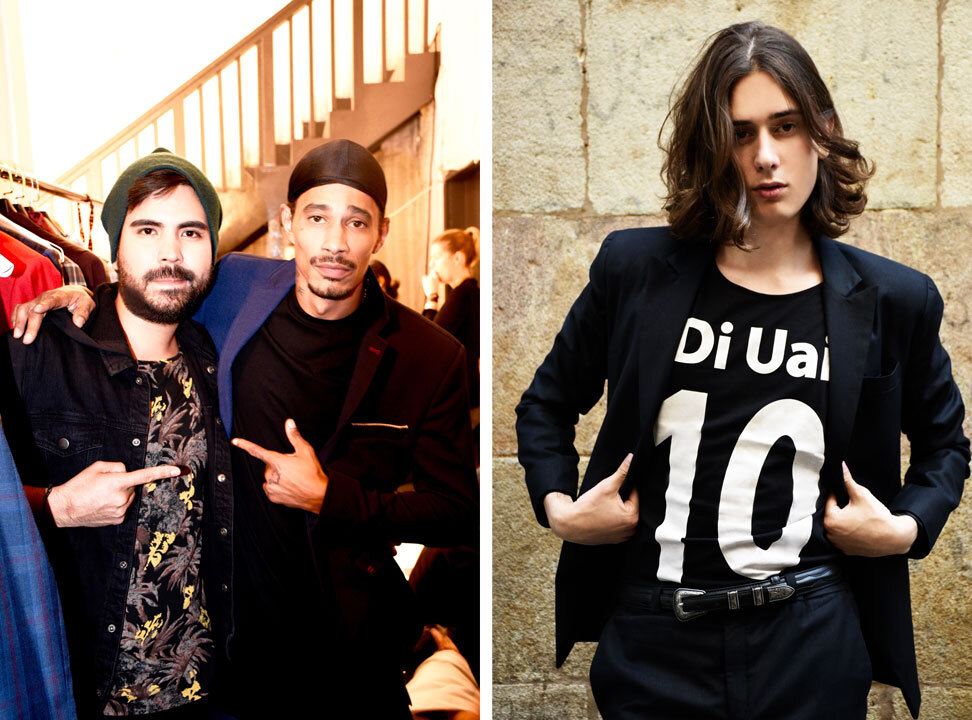 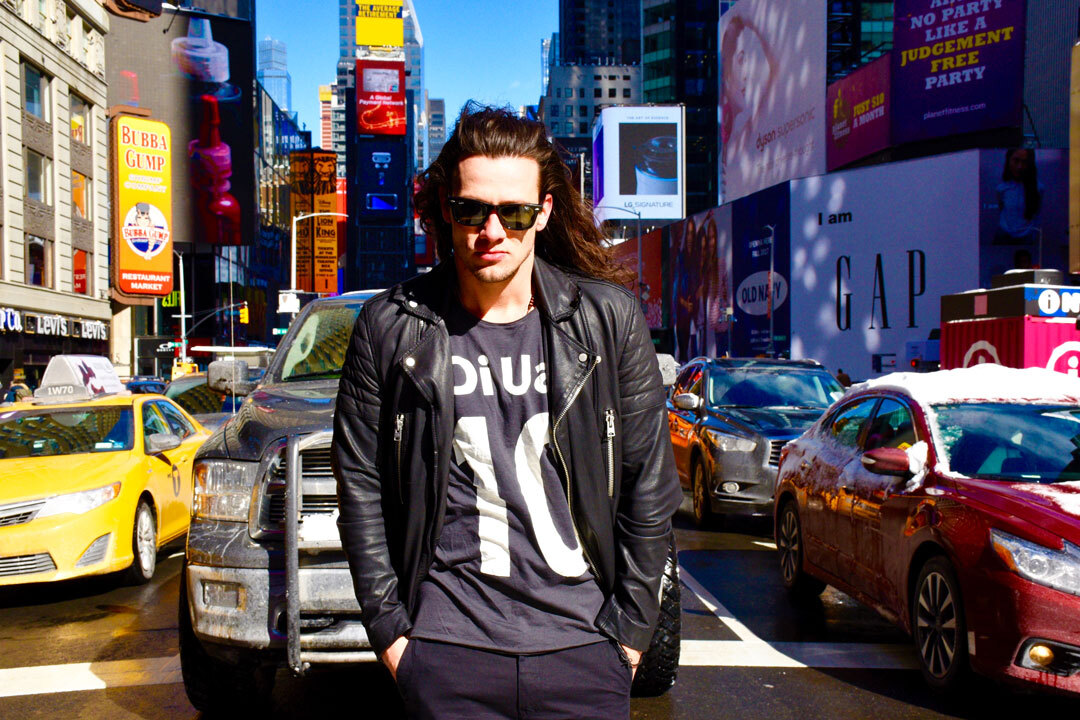 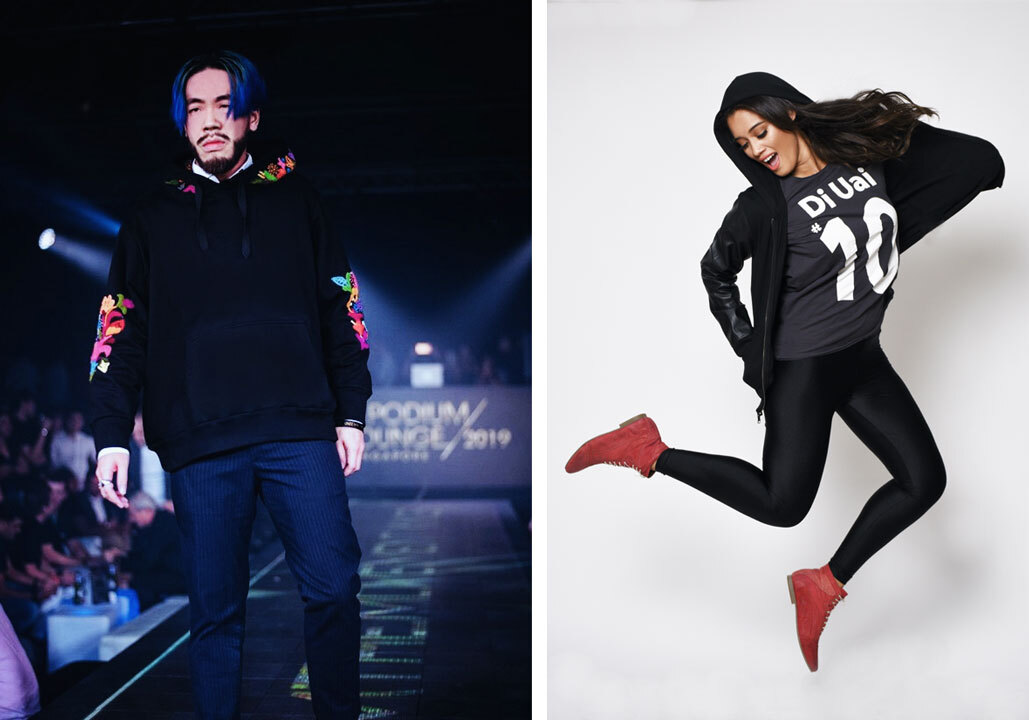 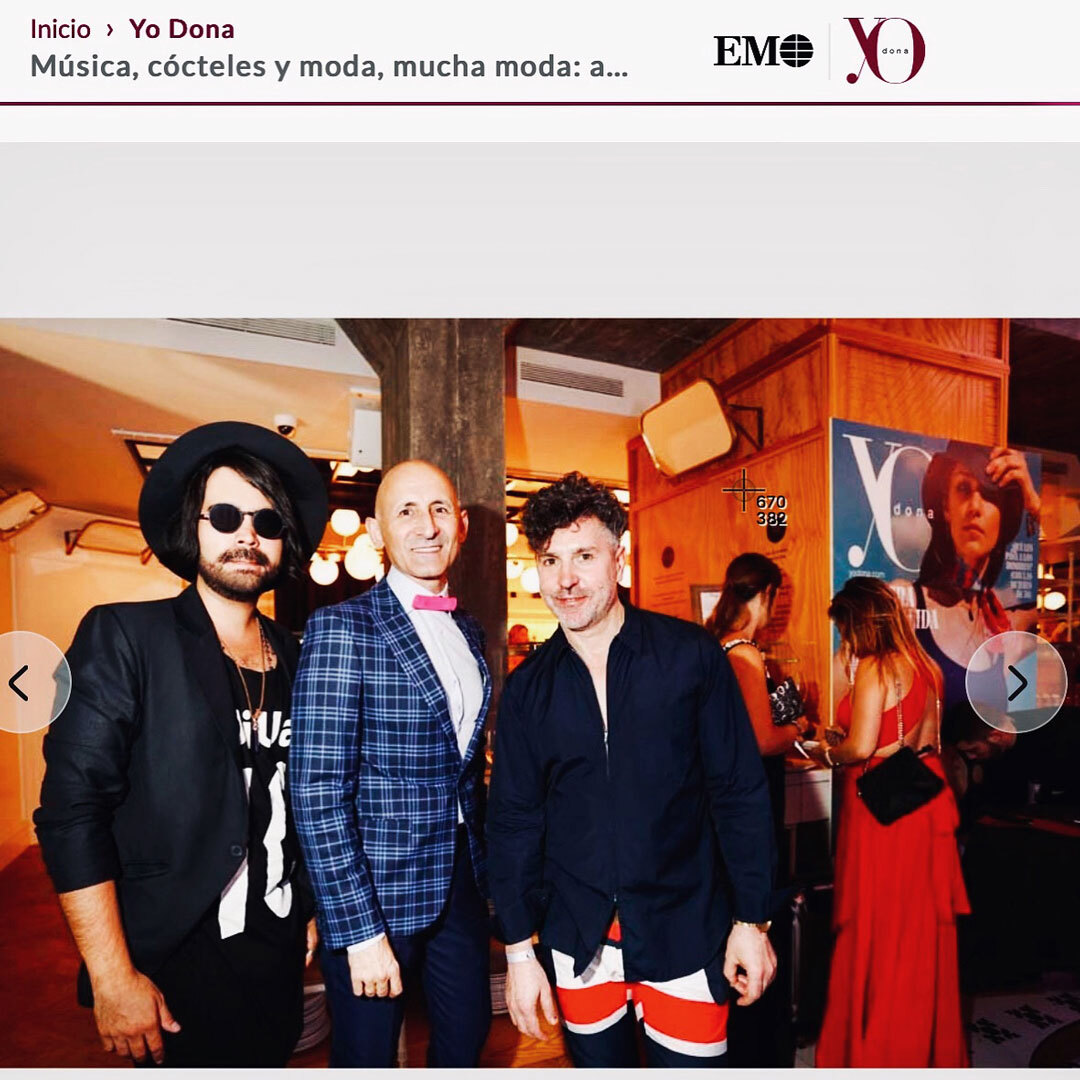 Diego Yamashiro with the famous Spanish designer Modesto Lomba and Creative Director Felipe SantaMaria from the brand Devota and Lomba, image of the opening day of Mercedez Benz Fashion Week Madrid for by Dona magazine.