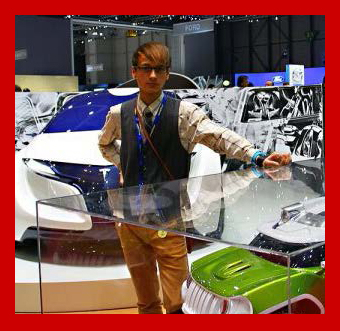 We are glad to present the profile of Vasiliy Kurkov, Alumnus of IED Torino, Master in Transportation Design, now a Senior Exterior Designer in Munich.

Q.: you work in Munich now, could you tell us what was your career path prior and after the IED course? What is your life after IED?

A.: I was born in Kaliningrad where finished a design art school and studied for 2 years at St. Petersburg State University for Industrial design. Then all of a sudden I won a contest of car design, got VDA design award, and went for several months for the prize internship that was held in General Motors studio (at that time they worked on several GM brands: Opel, Saab, Cadillac) in Russelheim near Frankfurt. When I came back to St. Petersburg I left the university and started working as a graphic designer for a local company to earn for an education in Europe. After less than 2 years I moved to Turin where started my BA course of Car design.

After the BA in IED I got a 6-months’ internship at Advanced Design Studio Mercedes in Sindelfingen (near Stuttgart, Germany). Then I came back to IED for a master degree. While studying I started working for I.DE.A Institute – it was a little design studio-supplier in Turin. Later I moved to Centro Stile Alfa Romeo in Turin as an interior designer. After several years there in 2015 I moved to Munich and became an exterior designer.

Q.: what is your occupation now? Any interesting projects that you can share with us?

A.: I actually work as a Senior Exterior Designer for a Munich design studio of a Chinese-American start-up called NIO. It is a new automobile brand focused on the production of electric autonomous cars.

I was a part of the team that worked on the exterior of the first serial SUV under the brand of NIO ES8.

Before for several years I worked as an interior designer for Centro Stile Alfa Romeo in Turin. I was a part of the team responsible for interiors of Alfa Romeo Giulia and Stelvio.

Q.: you obviously had some expectations while choosing IED for your studies. What happened then when facing reality?

A.: expectations from IED were different from the reality that I faced.

Education process is not academic as provided by average governmental universities. The teachers are real designers. Therefore, the studying process is not a theory to be learnt by heart, but capturing this information by doing (while getting over the professionals’ experience during demo-lessons).

“Teachers are real designers. Therefore, the studying process is not a theory to be learnt by heart, but capturing this information by doing (while getting over the professionals’ experience during demonstrational lessons). “

Q.: Italy is a renowned country with a mix of great value for traditions and with a unique creative atmosphere, with headquarters of worldwide known brands. Do you think this played a part in determining your decision to choose a school in Italy? Why did you choose IED Turin for your education?

A.: I chose IED because my basic knowledge of the Italian language at that moment was sufficient. In specific I chose Turin because this is the only city in Italy where there is a transportation design course and because Turin is the Italian capital of the automobile industry. There are design studios of FCA that include such brands as Alfa Romeo, Lancia, Fiat, Maserati, Ferrari etc. There are also worldwide known car design studios-suppliers with a history of over 50 years such as Italdesign, Pininfarina, Bertone and others. More than that, in Turin there are also a good automobile museum, conferences, exhibitions and parties that one can visit to better comprehend this sub-culture as well as build a good professional network.

Q.: as IED alumnus, what would be your advice to those going to attend the Institute?

I advise them first to graduate at a university in the native country or abroad and then to enroll to IED for a BA or MA degree to deepen personal competencies.